The best Roguelike on the Net

Maybe this is more difficult than I realize but would it be possible to have the player's image appear in the leaderboard?
That image for single player is really not necessary, it's already in the wording.

Also, I remember we had twice the number of player's images to choose from in the original game.
There was this other set on the next page that was not so... arr..? bobble headed.
Thanks for your time. Max
Top

You are right the original Lost Labyrinth had additional sprites to select from, but they were from a different style and not scaled 32x32 so I opted out of using them to keep it all in 1 style.

I could add more custom images to the leaderboards, but that probably wouldnt fit with customization (unless I add support for uploading icon graphics along with the highscore). If the images were static instead of cusomizable then it would be easier to add them to the leaderboards. 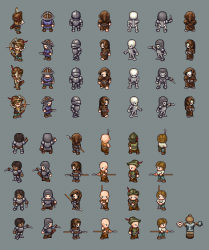 Not sure if they would scale well for 64x64 ratio though.

RPG maker sprites that are not 1:1 ratio (similar to LPC)

I had never seen LPC before. Fun to play about with

(going off topic, maybe you have seen heroforge? https://www.heroforge.com)

LPC would be such a major change for this game.
Maybe something to keep in mind is that no one will be here for the graphics.
Like Dwarf Fortress good gameplay mechanics can be all thats needed.
Surely LPC would be more work then it's worth?
I could imagine it maybe even limiting on future content that would need new images...
However... if your up to it then yeah! Lets see what you can do?! haha!

All I was realy wanting was leaderboard images